A talk about Hengistbury Head

Anchor ice on the Avon

In no particular order: 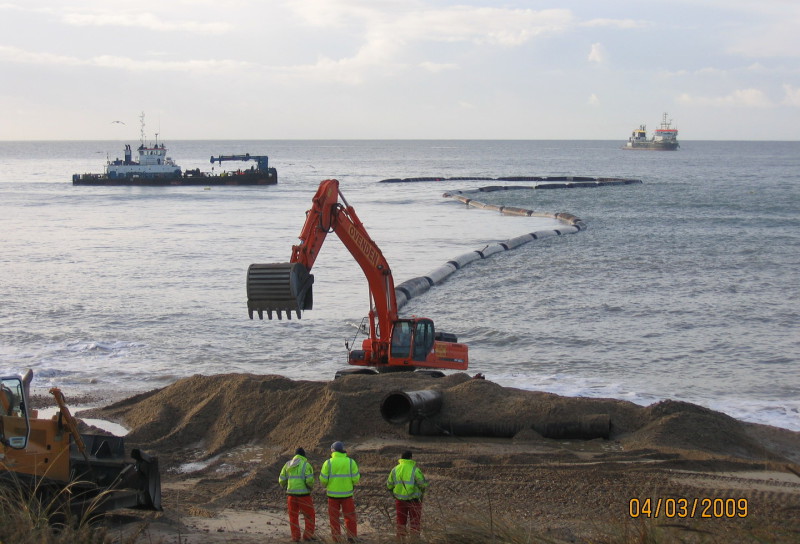 Gazing out to sea, and realising that two thirds of the planet is covered in water, is a humbling experience.

But it is good to know that sea level rise is limited to only about six inches a century and there is no evidence of increased storminess.

Barring an extreme climatic event, which is always possible and happened in the 1703 Great Storm for example, normal coastal maintenance (groynes, beach replenishment etc.) is likely to be adequate protection for Bournemouth. 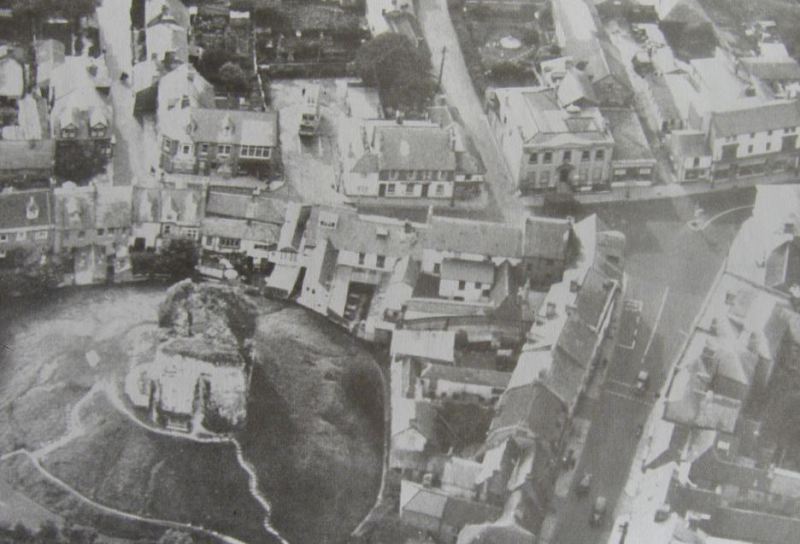 FIRST to build the castle, the Normans realigned the original normal crossroads so that Wick Lane is offset from Castle street,

SECOND the bus turntable was still in use rear of Wick Lane and Church Street,

THIRD the most attractive and historic Square House (on Wick Lane corner which is now the location of Pizza Express etc.) had yet to be demolished. 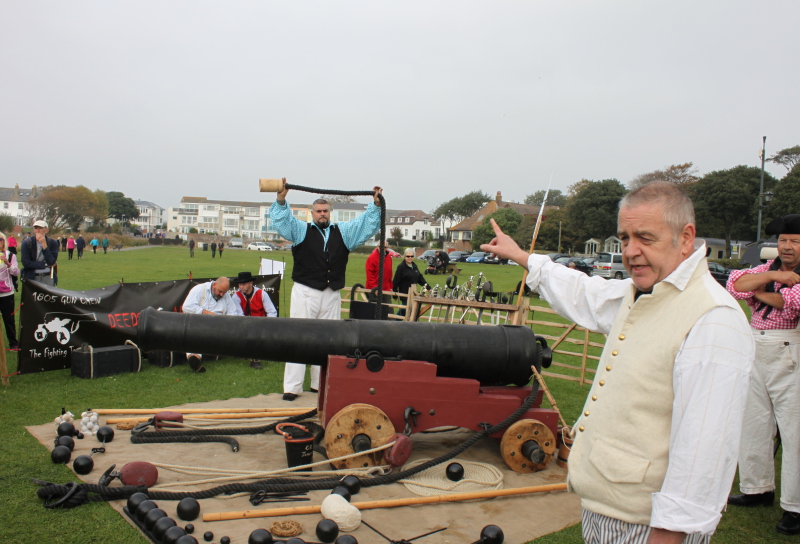 Re-enactment of Battle of Mudeford 1784

On 30 October 2016, as part of the re-enactment, the Deeds of Arms Naval Gunnery Display took place at Mudeford Quay.

The original battle was a fierce one with a popular Navy man killed. The smugglers successfully distributed the contraband but left a crew list on board their abandoned ship. This oversight enabled the court case resulting in one of them being hanged, although he was not the one who fired the fatal shot. 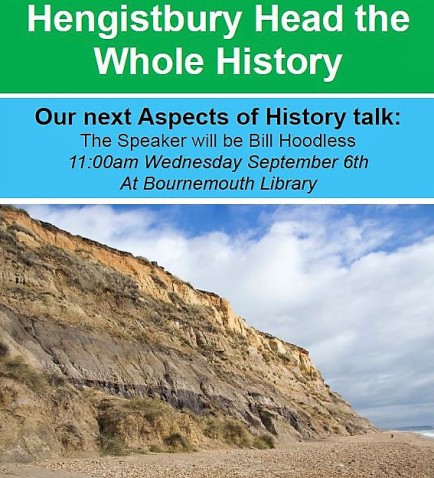 This was my second talk about the headland since the reprint of the book in 2017.

There was the usual problem of the vast majority of the story which had to be omitted due to limited time. However, some 84 slides were included followed by a lively Q and A session.

It is not possible or appropriate to do more than touch on this huge subject which is itself just a small part of the wider argument about world energy. However, the world energy situation does not in my view provide any justification for wind power.

The background must be that over the last 10,000 years or so human civilisation has developed but without much use of fossil fuels and then only on a small scale. However, since the start of the industrial revolution in the nineteenth century with its huge use of coal, steam power and steel, the pace has quickened until we now have enormous use of fossil fuels: gas for heating, oil for transport and coal for electric power. Human inventiveness has gone hand in hand with this sudden ability to make use of these natural resources. Electricity is indeed the immensely important common denominator of energy without which it is not possible for any country to raise its living standards.

Since electric power is so crucial to everyone, it is worth noting what it enables:

The reliance we all have on electricity is so great that it is hard to think of anything which does not need it. Unless that is one is prepared to return to the primitive tribal conditions of pre-history, conditions which still prevail in parts of the Third World.

It is no exaggeration to say that a reliable, reasonably cheap and flexible electricity supply is absolutely essential for prosperity and development. Fossil fuels have provided these needs for many years but are now under attack on the grounds that they cause runaway global warming, as renamed more recently, "climate change." This industry or "environmental movement" comprises green policies as supported by the UNFCC and the UN's IPCC and is well beyond the scope of my short note on wind power. However, I would mention that there is no evidence that global temperatures are increasing at a dangerous rate due to man-made emissions of carbon dioxide (CO2) from fossil fuel burning.

More important is that the trillions of public money already spent by the world on "tackling climate change" has had no discernible effect on its objective of curbing CO2 emissions. This is evidenced by the fact that CO2 continues to increase despite all the green policies designed to slow it down. The increase could well be due to natural factors anyway because these cause about 97% of CO2 emissions in the first place. If man's attempts to curb emissions are only acting upon the 3% of total emissions, it would be surprising if such attempts affected the outcome.

It should be remembered that CO2 is not a pollutant but a benefit to the world and that the increase of this trace gas from 280 parts per million (ppm) in the nineteenth century to about 400 ppm today has done nothing but good. It has reportedly added the equivalent of another continent to the planet in terms of increased greenery and all that means for better crop yields to feed the world.

Yet even if the curbing idea is felt to be a good one, it is still a nonsense because the world is not actually curbing the emissions. We know this because the world emissions can be assessed by looking at the new sources of fossl fuel coming on stream every year. It is a steep graph line with China and India leading the way with hundreds of new coal-fired power stations. Why therefore should any country try to change over from effective fossil fuels to ineffective renewable energy if world CO2 emissions are continuing to climb steeply?

Wind power is ineffective because it:

If the world can spare trillions of public money, I think it better to do that relieving poverty, saving lives and enabling poorer countries to develop and improve their prosperity.

Early days of the Bourne Stream 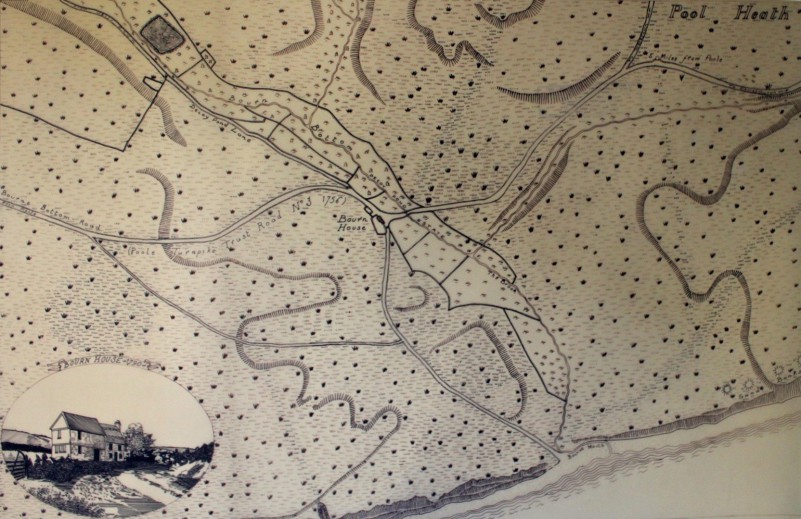 Although the town is relatively new, it remains rather surprising that it has been named after such a very narrow stream.

When founded as a watering place by Lewis Tregonwell in 1810, there was little to be seen except for a turnpike road, smugglers’ tracks, Bourn House (a smugglers’ inn) and the stream with its marshy land that was used for duck shooting.

The word “bourn” variously means a boundary, a destination or a stream. Obviously, Bournemouth is named after the mouth of the Bourne Stream as appreciated by the cartographer of Henry VIII in 1539 when it was noted, in translation from the Old English that “from Christchurch to Bournemouth is seven miles…”

Anchor Ice on the Avon

RIVER THAT FREEZES THE WRONG WAY ROUND 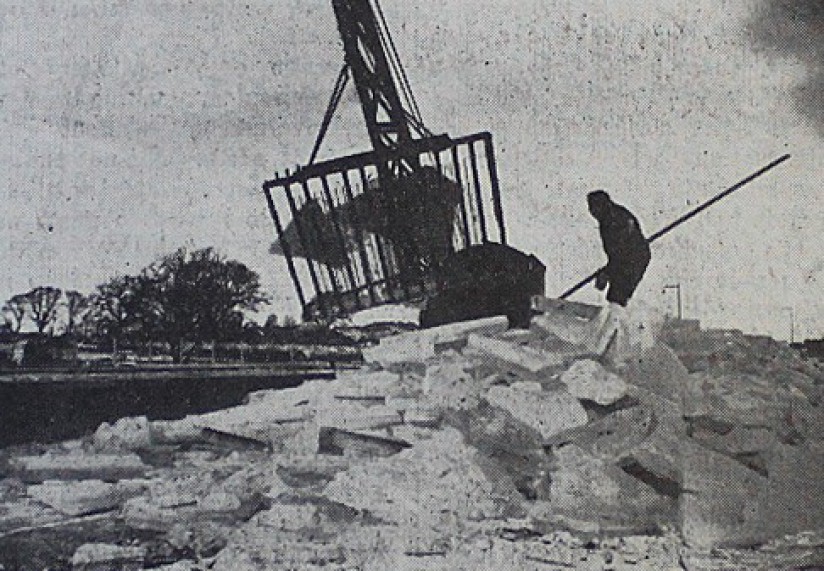 Although known as the Hampshire Avon, this part is in Christchurch Dorset and remarkable for sometimes forming ice on the river bed.

Here, an ice dredger is being used to battle the huge amount of this “ground ice” which has floated to the surface and piled up, so putting the water supply at risk.

It is the only known river in the country affected in this way. The cause is a combination of very specific conditions:

THANK GOODNESS FOR THE ORDNANCE SURVEY 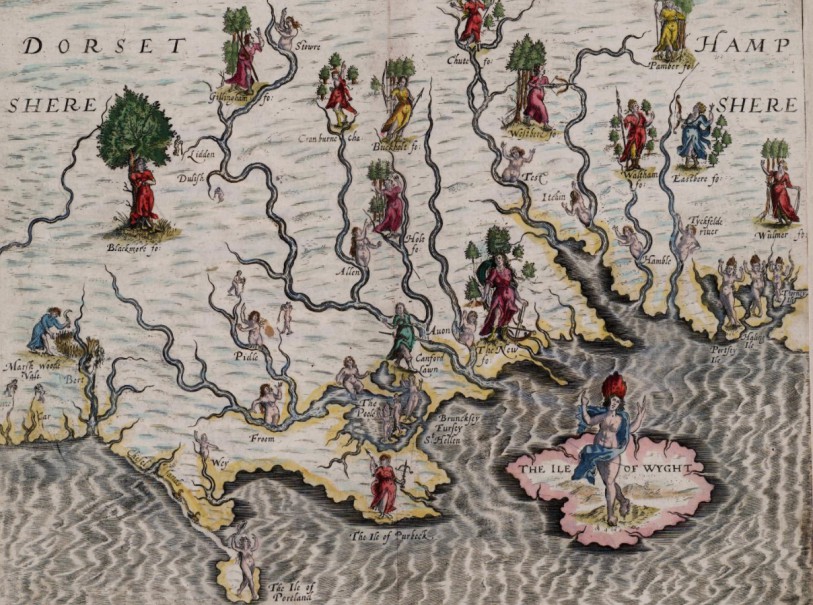 Here is a really old map of Hampshire, Dorset and the Isle of Wight by Michael Drayton, poet. It is a copper plate engraving and perhaps best described as fantastical.

Apart from showing some rivers, the map is decorated with goddesses and allegorical figures for forests and islands.

Although there is no real topographical value, it is of interest for its classic allusions which are reminiscent of contemporary poetry and masques. That said, the Stour, Piddle and Frome look in roughly the right places. 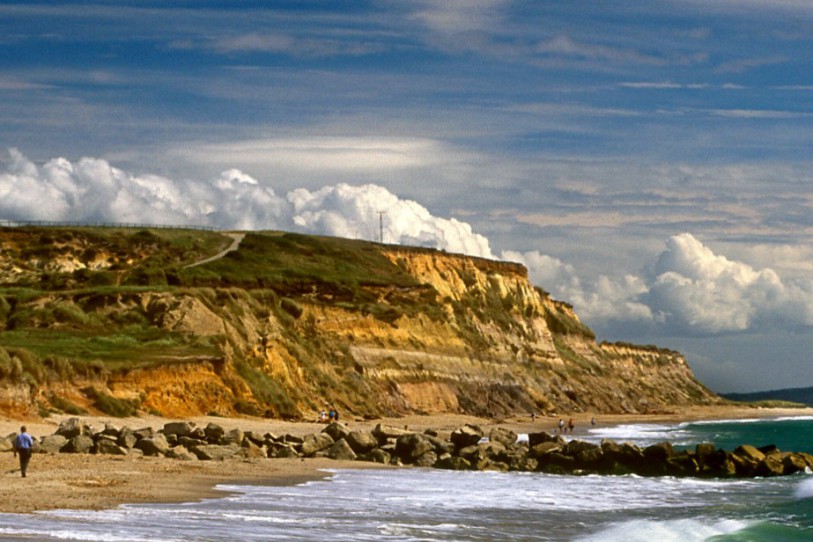 It may be difficult to imagine the causes, but there are two river terraces at the headland. Rather like the Avon River valley which regularly floods today, the very top of Hengistbury Head used to flood from a nearby river which has long since disappeared. The same applies to the second terrace which can be seen on the right of the photograph as fairly level and nearer to Long Groyne.

A terrace is an area of “high and dry land” which previously flooded when the course of the adjoining river was much higher. After the river has down-cut to a lower level, a new, lower flood plain will form, becoming in its turn a new lower terrace.

Since the whole of the existing headland is an erosion remnant, we can easily see the differences in the terrace levels from the beach. Two major causes of such high-level terraces are the great changes in sea level and the instability of the Earth’s crust in pre-history. 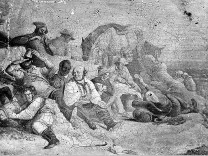 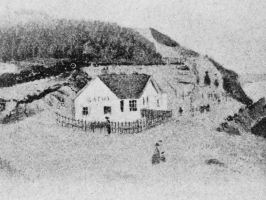 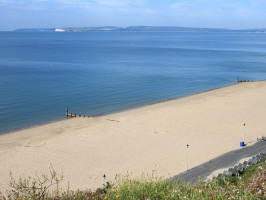 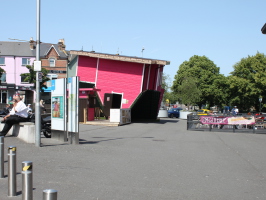 The upside down house by the Central Library 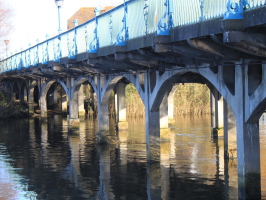 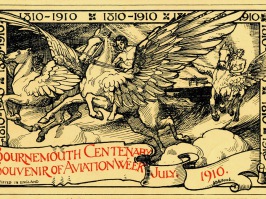 Advertising the huge Bournemouth Centenary of 1910 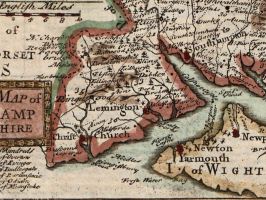 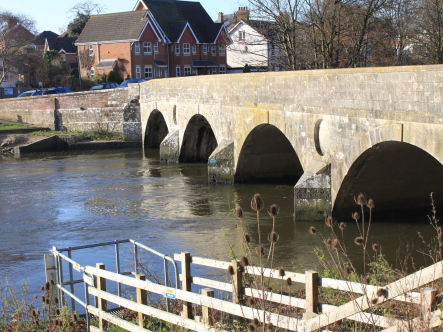 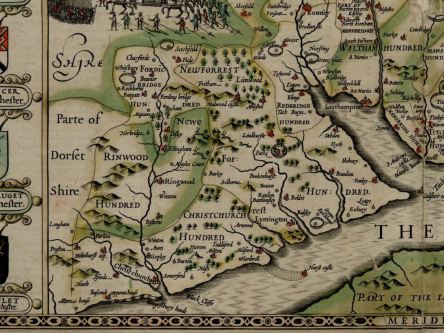 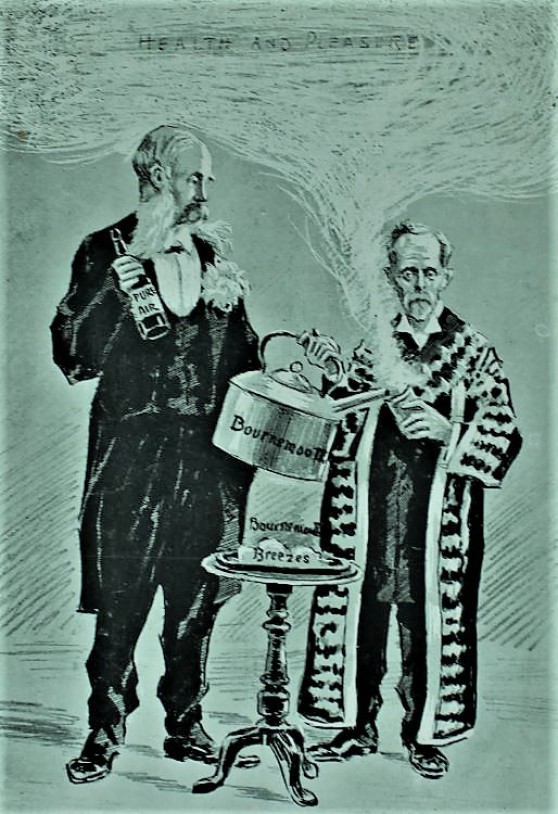 After its initial status as a playground for the aristocracy in the early nineteenth century, Bournemouth became a top health resort for rich Victorians in view of climate, the scent of the pines and health facilities. Probably the biggest example of this is the Mont Dore Hotel built in 1885 with its varied system of baths and choice of twenty different modes of using the water externally. The demand for this sort of specialist hotel was much less by the time it was taken over by the council in 1921 for use as the Town Hall.

However, a cartoon from 1904 shows that it was then judged necessary to satirise the whole notion of the town’s healthy air. It followed Sir James Crichton-Browne (1840-1938) extolling ‘the wonderful health-giving properties of Bournemouth’s air.’ He puts PURE AIR into the Magic Kettle which heats it with Bournemouth Breezes. Mayor John Elmes Beale, pours it into a steaming mug, giving HEALTH AND PLEASURE to all.

Perhaps we should not laugh at the eminent doctor’s opinion as satirised here in the Bournemouth Graphic. After all, he did live to be 97 years old!