A book which attempts to cover all the aspects of the popular and astonishing headland and was reprinted in 2017 at the request of the Hengistbury Head Visitor Centre.

This was my first book which took three years to research, write and get printed and yet needed to be cut back for publication purposes from 140,000 words to 110,000 words, a still considerable number. It was when I first learnt that sometimes a good story must be dropped due to lack of adequate information, complexity, the need to meet a deadline or the book becoming too long. A good working rule is: "If in doubt, leave it out."

There have also been unexpected feedbacks. For example, the Echo reporter who saw a ghostly rider was mercilessly ribbed at work for his reportage in the paper. However, Mike Parker (sadly no longer alive) from an old Christchurch fishing family, bought the book and told me during my research for Christchurch Curiosities that he also had seen the ghost. But in his case, he decided to say nothing to anyone because he would never have been believed and worse, would never have been allowed to forget it!

Apart from its great wildlife and tourism importance to Bournemouth Council, who bought Hengistbury Head for £25,250 from retail magnate Harry Gordon Selfridge in 1930, there is a surprising history and geological importance. For instance, there was once a huge summer house on the summit of the Head as depicted in this artist's impression: 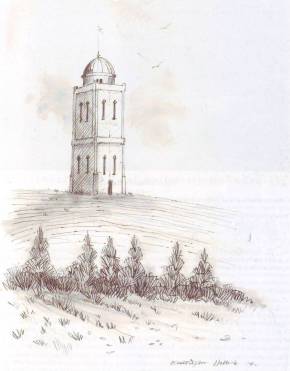 This is Warren Summerhouse long since demolished to the point where some book buyers were initially disbelieving that it ever existed.

There is a considerable history not all of which was available to me when the book was written. However, there were several pictures including one by an unknown artist in 1818 and another by Constable which enabled this impression to be drawn. One must imagine a substantial building with a height to the top of the first floor of 40 to 50 feet. What a peaceful place on a summer's day and what a fantastic and unspoilt outlook that must have been. 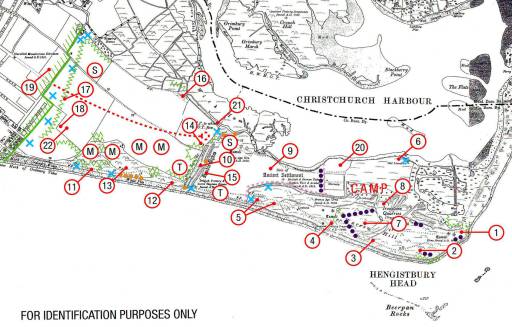 It is also now a long time since the military takeover of the Head during World War II. This map (key in the book) shows the extensive presence including radar towers, guns, pill boxes, minefields, weapons pits, the camp etc. Both the RAF and Army were here in force.

During the Iron Age, the Double Dykes were built and used for providing security to Hengistbury Head which was one of the first towns in the country; during the war, they were also used for defence by gun emplacements.

Pre-war Hengistbury was a very different place from both its wartime era and from today. The following extracts from the book give an idea of just how much things have changed:

Blackberry bushes were very extensive on the largely undeveloped land in Harland and Baring Roads. Since there were enough for everyone, they were only picked when fully ripe. A common sight was a lady in a coach with four horses, driven by a top-hatted coachman and having two Dalmatians running at the back axle. A dead sheep was washed up at Southbourne about once a year. A prep school, known as Mount Pleasant, with half the boys being boarders, existed between Dalmeny and Hengistbury Roads. The partly developed Harland Road was gravel only, and so potholed that cyclists would use the footpaths. A beach café on stilts existed near the site of the old pier, but was wrecked by the sea and its timber salvaged by local people. Around 20 beach huts were placed literally on the beach in the region of Solent Road, but removed by handcart for the winters. The Batters on the north slopes of the Head were not then so overgrown and the children who cycled up there christened this quarry spoil the White Elephants.

The floating café on the sandspit had started due to three lads asking for a drink of water from Mrs. Derham, when the family had a houseboat, the Margaret, on the south side of the harbour. Having been given tea and scones, they pointed out that it could work as a business venture. The idea was taken up, tables and chairs were set out, and teas served. Fig.15 is a snapshot of lobster and crab teas being prepared by the family in 1925. How delightful to hike through the unspoilt beauty of the western approach to the headland and be rewarded with such a tea on the harbour’s edge! The Margaret had been built in 1911 and occupied in 1912. During the winter, the houseboat was relocated to what is now the Highcliffe Sailing Club’s dinghy park on Mudeford Quay.

I must mention the imaginative way in which one of the children on the Margaret dealt with an irritating sibling, Sidney, in about 1918. Having reached the end of her tether, his older sister, aged only four or five years, hit on a most effective solution. She placed Sidney in a tin bath, which floated right up to the Run before a fisherman rescued him!

Another little known story from 1898 concerns the stranded Marie Theresa which was cast up by Beer Pan Rocks. These rocks are the famous Hengistbury ironstones which form part of the Christchurch Ledge in the sea at the eastern end of the headland. This is what happened:

On 27 December 1898, a 327 net tonnage three-masted sailing barque, the Norwegian registered Marie Theresa, went aground just off the Head, on only her third voyage, whilst carrying a cargo of coal brickettes to Poole (Fig.30). The route was from Le Havre to Martinique. Bad weather had managed to blow away the sails, forcing the ship to run before the wind. She was seen from Southbourne Pier to be in difficulty. It seems that the ship went above Christchurch Ledge at a high tide and then ran aground on a sandy bottom near Beer Pan Rocks. The position made it very hazardous to reach the open sea again. When she was found to be badly leaking two days later, the Coastguard took charge. Coastguards rescued all twelve crew, including Captain Beven, who left last of all and with reluctance.

It was a textbook use of rocket apparatus, a skilled procedure involving a block with instructions in French and English, a hawser, a travelling block, and a life-belt paid out from the cliff top fixing. The Coastguard practised the procedure every quarter. The right tension had to be achieved on the hawser before attempting to bring the men ashore, direct to the top of Warren Hill, a somewhat scary journey. When the third rocket line was made secure and the crew transferred safely, there was much cheering from the crowds of spectators on Southbourne Pier and promenade. The pier itself was smashed by storms just two years later.

The Royal Engineers blew up the wreck the following June, witnessed by large crowds, with Lady Meyrick setting off the detonation. Although very dramatic, the explosion was only partly successful, and the sea cleared the remains over several years. The purchase for £40 of the rescued cargo sounds like good value to the buyer. Many timbers were salvaged for the interior of a house in Springbourne, the site of which has been redeveloped in recent years.

Altogether there are 61 illustrations. Owing to on-going demand after the book was sold out years ago, there is now a 2017 reprint.

There is a selection of pictures for Hengistbury Head in the sub-folder under "SLIDES".

If you would like to purchase a copy, it may be simplest to do so via the Hengistbury Head Visitor Centre or Bookends, Christchurch. If you would like a signed copy, let me know and an arrangement can be made.

This webpage about the book is necessarily very limited. However, a wealth of information can be seen on probably the most readable and comprehensive Hengistbury website (copy and paste the link) at: