At the same time that I was writing the book about Christchurch Curiosities, the council approached the Chairman of the Christchurch History Society about the need to commemorate the Town Halls. I was happy to do this at his request and, as usual, found much more than expected eventually resulting in a book with 30 illustrations. In particular, the Third Town Hall of 1746 had been moved from its traffic-blocking position at the east end of the High Street to become the Fourth Town Hall on a much better site to the west. It was completed and ready for use by 1860 to the original design using much of the existing stonework. When I was writing the book, we were therefore approaching the 150th anniversary of the relocation to a site which served the town well until the new prmises were built in Bridge Street in 1980.

At the request of the Chairman of the Society, I was happy to check through the story of local government in the town from the time it was a Saxon Borough to the present day. It turned out to be a rewarding task but not an easy one. There was great support for the venture from the History Society and Christchurch councillors resulting in a very convivial book launch in the Fourth Town Hall itself. The building is now open-sided at the ground floor and used as a most attractive Mayor's Parlour on the first floor.

The importance of that relocation can be gleaned from this picture of ex-mayors of the town. They are standing at the boundaries and corners of the Third Town Hall. It is surprising that the horses and carts managed to navigate around it at all. 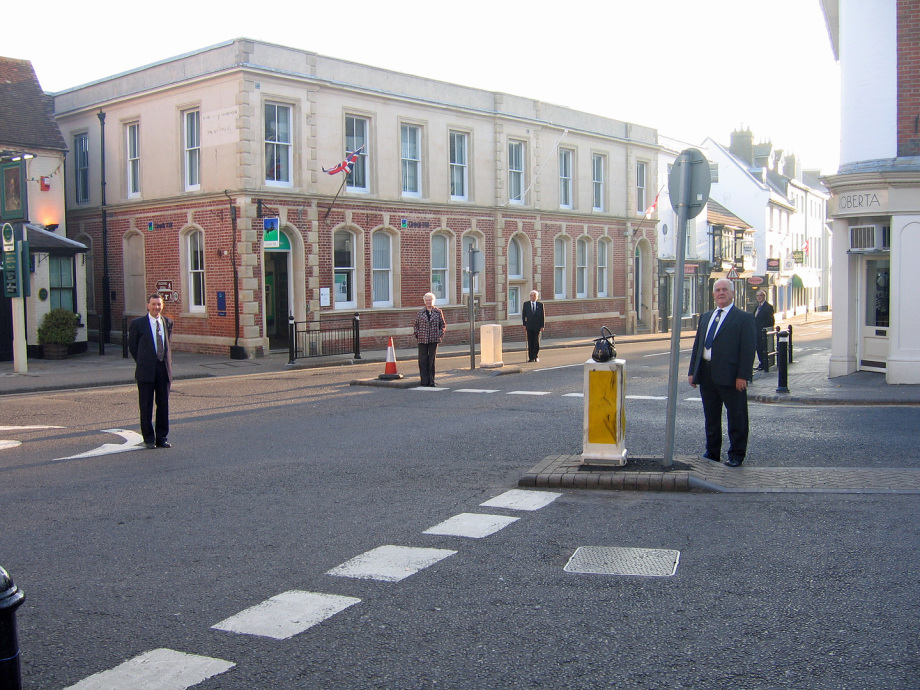 Much of the history was in the huge Old Minute Book, discovered not without difficulty at the Dorset History Centre where it is now held. Enough of it was legible to make it a great help in seeing how decisions were taken and the forces at work. Luckily it had not been microfilmed so making its perusal much easier. Below are three pictures telling some of the story: 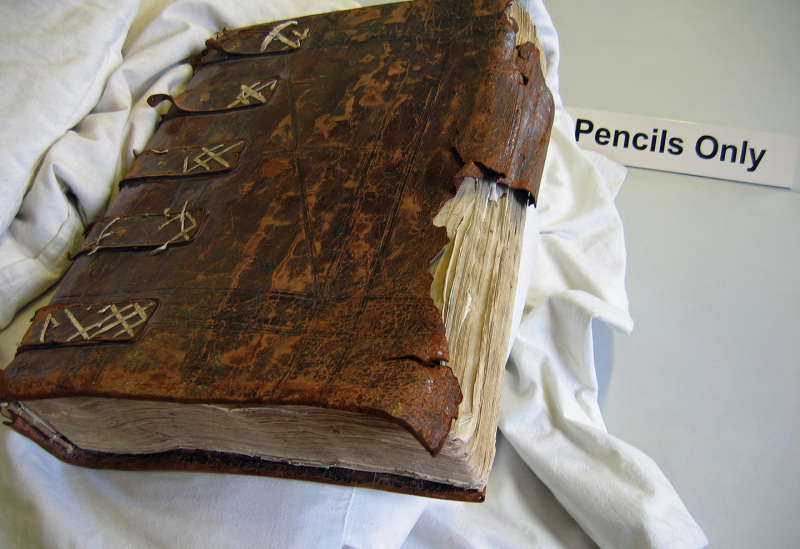 Showing its age but full of useful information. 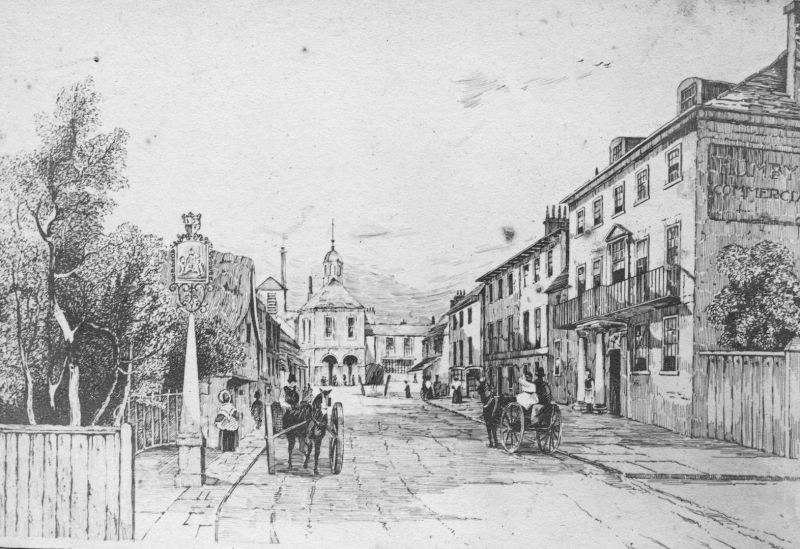 A view down Castle Street of the building at the end, blocking free movement of traffic. 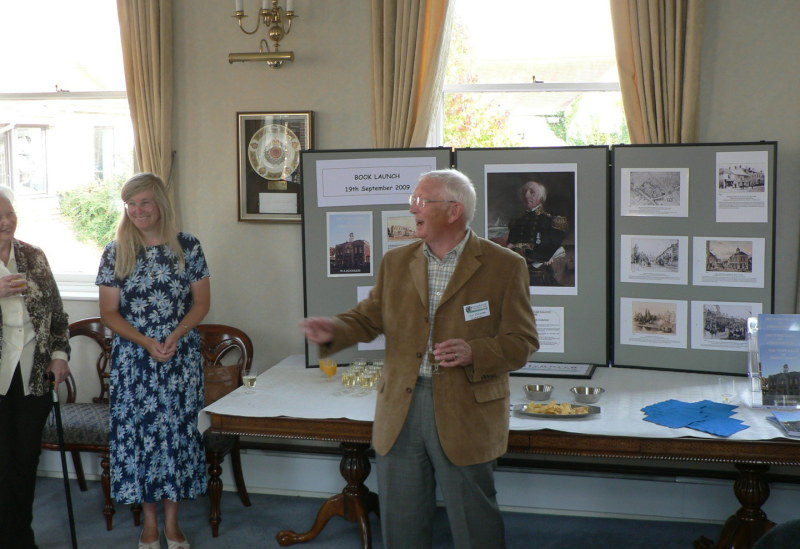 The Chairman of the Society at the book launch in the Fourth Town Hall, now the Mayor's Parlour.

Since Christchurch was a Saxon Borough, some things have been lost in the mists of time. However, we know that the First Town Hall, known as the Market Toll House or Old Tolsey, was situated in the High Street on the exact site now occupied by the Carphone Warehouse. Since however it was relocated by the Corporation probably in the fifteenth century, it is not known when it was first used, nor what it looked like. The relocation was to the same general site as the 1746 Third Town Hall mentioned above.

Perhaps the whole idea of moving the 1746 building from the road junction of Castle Street, High Street and Church Street to where it now stands at 30 High Street was difficult to imagine at the time. A particularly humorous letter was sent to the Christchurch Times by PUNCHINELLO in 1856 conjuring up quite a picture:

SIR, – In all the municipal Boroughs, there has been a procession of the authorities, for the purpose of proclaiming Peace. We have not had such a procession, but I presume we shall have a demonstration in some way. Now I have heard a short time ago that the Committee, or some of the Committee, appointed to remove the Town Hall to a more eligible site, did really propose actually to remove our old Hall bodily, upon wheels or something of the sort, to a site they had fixed upon. Not having heard that the Committee have done anything else, I suppose they have matured their plans in this respect, and that therefore they must now be almost ready to try the experiment.

Would it not be a capital idea, and one for which I am sure they will thank me, to get everything ready for Her Majesty’s Birthday, and to have a grand procession as a peace demonstration; in which procession our old Town Hall, in solemn march, might form a conspicuous and highly interesting feature. The other portion of the procession could be easily arranged so as to have great effect; for instance, the “oldest inhabitant” might be so placed as to have the overseer-ship of the whole and to see fair play. There are many other Gentlemen and antiquated Townsmen, who would prove great auxiliaries to the interesting scene, if properly placed; and Twyneham himself, if he could be induced bodily to appear, would prove not the least attractive of this exceeding attractive affair.

Now don’t let this matter drop. I do believe it will so strike the minds of your readers with pleasing ideas, as to prevent their allowing the Committee to remain asleep.

There is one thing that I must urge upon the Committee, that is to be sure and issue notices and programmes of the procession as early as possible, because I am authoritatively informed that my relation Punch, is particularly anxious that one of his contributors and draughtsmen should be present on the ever-to-be-remembered, if ever-to-take-place-occasion.

There is a selection of pictures for Old Town Halls in the sub-folder under "SLIDES".

As for the book about Rolls and the Air Show, unfortunately, this book has also sold out and can only be found at the library or perhaps by repeatedly searching eBay or the internet generally.