The longstanding plan for this book finally became possible when enough time could be allocated.

There had been the huge four day celebration and commemoration of Charles Rolls in 2010 being 100 years since his fatal accident at Hengistbury Head, Bournemouth. Indeed, the service, at St. Peter's School playing field Southbourne, was close to the crash site and included a silence which was accurate to the minute, i.e 100 years since the moment of the crash.

The reason, that the first Bournemouth air show took place in July 1910, was that it was a part of the 1910 centenary celebration of the founding of the town as a watering place by Lewis Tregonwell in 1810.

Since 2010, under the initial leadership of Tony Harrington MBE, the organising committee decided to have annual commemorations and to install a permanent heritage feature. Now in the form of a charity, the Charles Rolls Heritage Trust, No. 1174592, has maintained the commemorations at the memorial plaque in the playing field involving the Mayor, speeches, a service, a minute's silence and a talk in a nearby church hall. However, since the heritage scheme has proved difficult, that remains (as at 2020) in the planning stage. The problem with the existing plaque is that it is out of public view on private land.

The book seeks to give the astonishing story of Rolls' life and times together with that first air show which was a milestone in the development of British aviation. It also outlines the major heritage significance for Bournemouth and the lessons for today, lessons which are just as relevant now as they were in 1910.

This limited edition, published by CRHT, was sold out within weeks of publication in 2019.

Please see the separate tab for much more detail about Rolls. 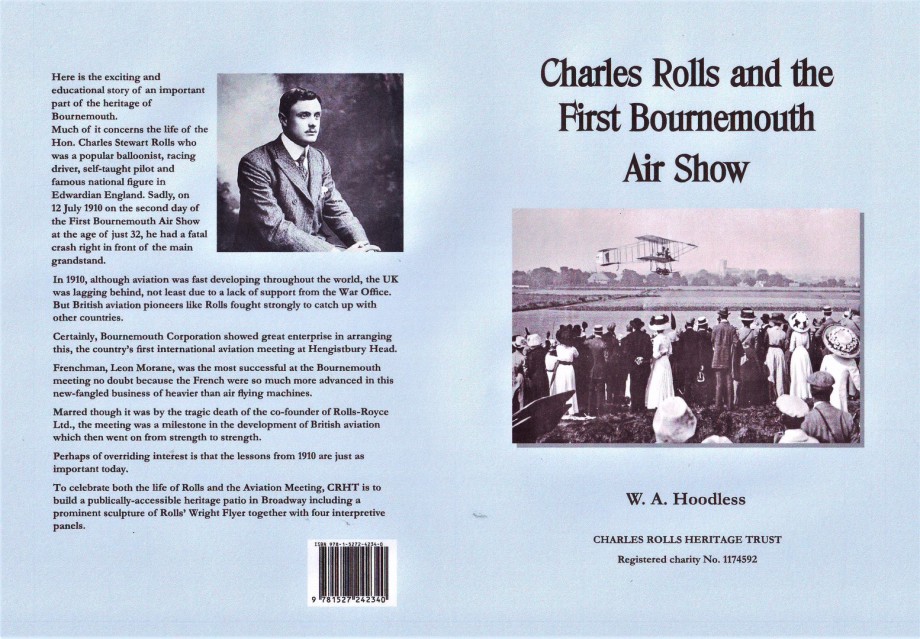 There is a selection of pictures for Rolls and the Air Show in the sub-folder under "SLIDES".

As for Old Town Halls, unfortunately, this book has also sold out and can only be found at the library or perhaps by repeatedly searching eBay or the internet generally.