There are some excellent books about the town and its history but I wanted to study the lesser known, the unusual and the intriguing.

One example is the horrifying story of the Queen's ancestor who was badly abused by her husband until late in her life when she found a safe haven in Southbourne, Bournemouth.

Another is the sculpture, as below, of two of the town's early celebrities just outside the Bournemouth International Centre. The recognised founder of the town, Tregonwell, is shown rather smugly playing with a bucket and spade (out of shot) whilst its architect, Creeke, is mournfully perched on a WC pan! The sculptor's explanation of this feature and a number of others are in the book. It is fitting that the greatly hated IMAX is in the background, although now demolished, because this shows the constant change in the town. 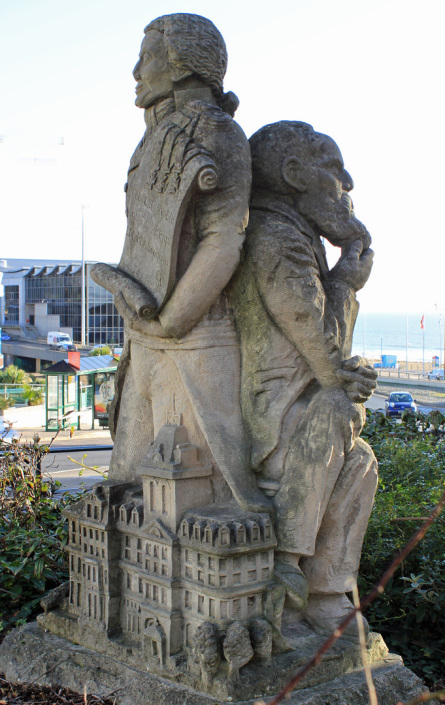 An idea of the contents can be gained by looking at the headings for the 28 brief chapters:

1   Seaside humour and the B.I.C. sculpture

4   Which is the oldest house?

6   Tregonwell and his Great Accidental Invention

11 Of lightning and ashes

12 The Queen’s ancestor and Stourfield House

13 Satire on the sands

14 A Ukrainian and two kings on the beach

17 Mayor Whitelegg and some recollections

18 Faltering start but a high-speed finish

19 Remedies at a Watering Place

20 Of plank, smuggling-outrage and chapel

25 World record for one day

26 Strange case of the Beales’ Fire

Here is an example of the work of the Bournemouth Bard, Cumberland Clark writing of his adopted town:

So inhale the Pine scent; for I’m sure if you care to,

You’ll find it’ll cure all the ills flesh is heir to,

Erase the grog blossoms that bloom on the nose,

Faulty complexions, or bunions on toes.

Here’s my advice – take a walk on the Cliff:

To cure all your troubles, just stand there – and SNIFF!

But before judging his poetry too harshly, we must remember that Clark had led a packed and exciting life including farming and prospecting, wrote extensive non-fiction and was a Shakespearian scholar. What he called his songs were just for fun, as proven by a Bournemouth Council Countryside Officer who has sung them to his banjo at a Clark memorial event!

Below, there are two illustrations from chapters three and nine. The first is when Laurel and Hardy appeared at the Boscombe Hippodrome in a show which brought the house down. Here they are pictured in the kitchen of the Chine Hotel where they were staying. The second is when an early resident, Mrs. Drax, had a joke at the expense of her neighbours. It is her drawing of a social scene from a time when the tiny village of Bourne boasted just a few dwellings in what is now the town centre. 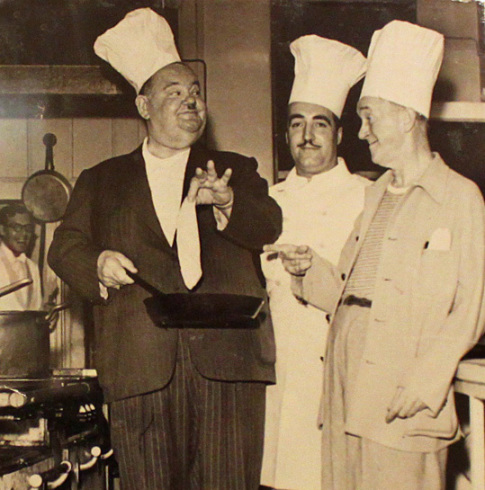 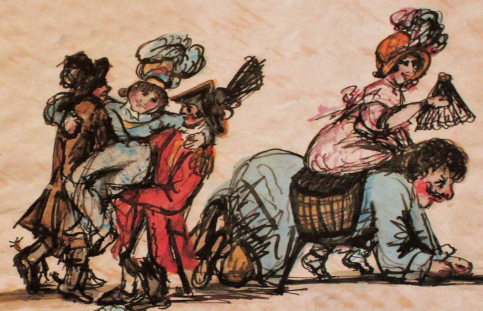 A typical story, if there is such a thing, from Bournemourth Curiosities is given below:

In the 1990s, Bournemouth University acquired the town centre fire station mainly for its Students’ Union and discovered an amazingly long fireman’s pole. According to the Times Higher Education website, Bournemouth has the longest such pole in Britain at more than 14 metres. However, this feature, described as a “campus curiosity,” was not ideal for the students because it was no longer usable as designed – the holes in the floors had been blocked up!

After Bournemouth Central was replaced with a new building at the Wessex Way, Springbourne, it underwent a complete change – yet from the outside it still looks very much like a large town centre fire station. Its strategic location at 36 Holdenhurst Road was excellent and indeed only a stone’s throw from Royal London House at the Lansdowne. Those insurance offices (now also occupied by the University) were built on the site of the famous Metropole Hotel which was destroyed by a Luftwaffe direct hit in 1943, causing a tragic loss of life. Following the purchase of Bournemouth Central by the University, it became known as the Old Fire Station, being an entertainment venue both for the public and for the Students’ Union. Apparently, it even makes a “profit” because the entry and bar charges for events and drinks help the Union’s funds generally. The top floor is now given over to archive storage. All in all, it is difficult to imagine a bigger change of use.

The ground floor was mainly for the appliances, the first floor had canteen facilities and some officers’ flats, the second floor included bedrooms and lockers, and the third floor had the usual recreation room (including snooker) to combat the occupational hazard of boredom. Despite callouts, some pretty drastic drills and good technical training, boredom is hard to eliminate altogether. At the highest level, access to the pole was through a self-closing metal gate which is still there. It is strange to reflect that the area, once used for recreation by firemen and many a dash for the pole, now houses some dry and dusty archives. That top floor is within the roof space having an uninterrupted slope at the front and dormer windows to the rear. Fig.15 shows the fireman’s pole as now existing within a bar – it is of large diameter and of polished brass appearance. Whilst the great width is in order to give sufficient stability in use, the great length is in order to serve the full height of the building.

This was a large facility with four appliances including one for special purposes and three for fire-fighting duties – there was a bay for each fire engine whilst the right-hand bay was used for access to the rear. Film exists showing three appliances turning right into Holdenhurst Road at the same time. Emergency drills were most impressive with a stop watch being used to ensure a “turnout for drill” within just 60 seconds.

But why was it such a high building in the first place? The answer relates to the size of the operation being carried out and the almost inevitable restrictions of any town centre site. It seems that this building was planned to serve a considerable area from a built-up location. It therefore had to have sufficient accommodation to house the appliances and staff who worked the 12-hour shifts. Without much land, the “only way was up” and a very tall fire station was the consequence. Having placed the recreation area at third floor level, the Fire Service’s need for speed dictated the length of the pole – stairs would have been unacceptably slow.

Although some stations have staggered poles to reduce drop distances, this was evidently not considered essential here. Indeed, provided this extremely long pole was correctly used, there was little risk. Before using it, the practice was to look upwards to see that all was clear and any fireman jumping on to it would shout “on the pole” as a warning to the rest of the station. If this still sounds a little dangerous, perhaps the main thing is that no accidents are recalled. Nonetheless, there were health and safety arguments in favour of stairs in a 2006 three storey Plymouth station, which was built without a pole. According to press reports at the time, such views were given short shrift by firemen who considered the pole method to be the quickest and safest way to do the job. However, the Fire Service now advises that there is no speed or safety problem in using the stairs.

Before leaving the main issue here of the lengthy pole, mention should be made of the competition – the West Midlands Fire Service claimed that Birmingham had the longest one in Europe at 40 feet (12.2 metres). On investigation, it seems to have been at Lancaster Circus fire station, which no longer exists. Nonetheless, in the light of the claim, I have re-inspected the Old Fire Station to take the fireman’s pole measurements and can say the Bournemouth version is 14.17 metres long from ground floor to the ceiling of the third floor. As a minimum, another 0.15 metres must be assumed above that ceiling level for the top fixing and possibly much more. Unfortunately there was no access to establish the extra length that is out of sight. Applying therefore a total length of “at least 14.32 metres,” we find that it converts to 46.98 feet, compared to a figure given of 47 feet in a Bournemouth Fire Brigade video. Suffice it to say that it is a very long pole indeed and probably the longest in the country.

There are four “extras” to mention. Firstly, did the pole ever get used “unofficially”? It was possible to slide the pole with a cup of coffee in one hand and it was not unknown to travel it upside down. However, the story about a fireman sliding down head first with a complete tray of coffee is believed to be an exaggeration! Secondly, what is the reason for towers at fire stations? They were initially to allow the canvas hoses to dry. After use, they would be scrubbed clean, tested to ensure there were no leaks, repaired if necessary and then hung vertically to dry with the aid of a top-level pulley system. In the present days of plastic hoses, there is no need for a vertical drying system. Another use, which is still vital today, concerns safety training with ladders. Firemen regularly practice simulated rescues using ladders placed against the tower at various angles and heights.

The third one is all about Omo the cat at the old Pokesdown Fire Station which closed in the 1970s. The cat’s owner was the fire officer who lived in the residential quarters above the appliance area. Being completely white (hence the name) and totally deaf, it was well known at the station that the cat was not permitted to venture out of the quarters under any circumstances. Yet one day in the early 1960s, Omo was spotted crossing the very busy road at the junction of Seabourne Road and Christchurch Road. The horrified firemen immediately had the lights turned red for all traffic directions, a procedure normally used to allow a clear run for a fire appliance in an emergency. To the great puzzlement of the watching public, no fire engine appeared. Instead, the officers rushed out in force to catch and return Omo, who was none the worse for the adventure.

The final tale concerns a ghost. Standing rules have always been that firemen awaiting a call need to be dressed but do not need to have footwear. That way, they can go straight to the appliance and pull on their boots en route. The exception is the driver who needs shoes to drive and would place them next to his bunk in the night. Recruits were told that a driver’s shoes were often moved by the Bournemouth Central Ghost to a different place from where he had left them at his bedside! Once new officers realised the shoes were actually moved by a colleague, they would happily join the scam for the “benefit” of the next recruits.

There is a selection of pictures for Bournemouth Curiosities in the sub-folder under "SLIDES".

To purchase the book, it may be simplest to do so from Bookends, Christchurch or via Amazon. If you would like a signed copy, let me know and an arrangement can be made.