Road to Brexit, Democracy in Action

There has been an enormous political upheaval caused by the decision of Prime Minister David Cameron to hold a Referendum about continued UK membership of the European Union.

Having seen both the media reaction and the nature of new books on the subject, I felt that there was room for an impartial look at it all, one which had no axe to grind. It should be easily available and in stock at Amazon. The Amazon "Look Inside" feature is enabled so that by clicking on this, a number of extracts can be read to get a better idea of the whole book.

Road to Brexit covers the arguments from both sides, the events and the aftermath of the vote of 23 June 2106 up to the next day. I hope that it may stand as a record of who said what during this powerful, yet greatly criticised, exercise in democracy. Below is the back cover of the book followed by a publicity leaflet extract and two reviews. 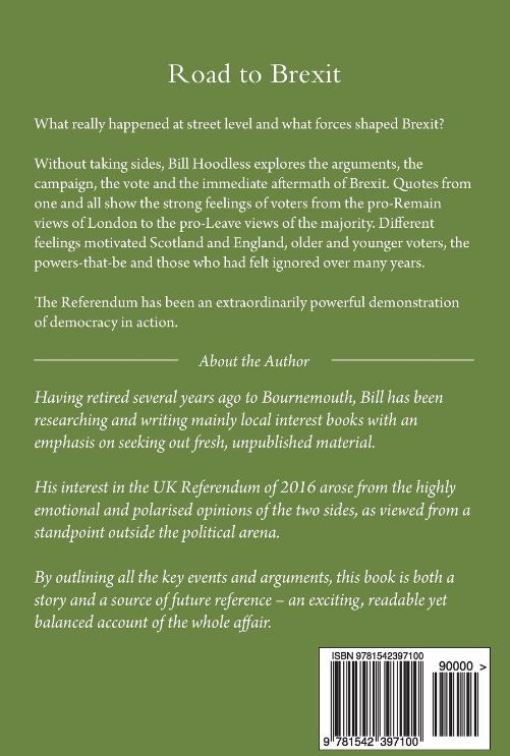 HOW AND WHY DID BREXIT HAPPEN?

What is the whole story behind the headlines? Can the key influences affecting both sides be assessed without bias?

Why did a clear majority vote to Leave the EU and what lessons might be learnt for the future?

These may be difficult questions. But it is important to see the motivations for and the operations of the huge political forces which shaped the campaign and the outcome of the Referendum with a view to the General Election of 8 June 2017.

There is a full description of the causes and events that led to a clear success for Vote Leave. Most articles and books on the subject are written from one point of view and concentrate on just the famous. But in this more “street-level” account extending to the immediate aftermath, both the Leave and Remain sides of the argument are given and many telling quotes included from the voting public.

Chapters are arranged broadly in date order from the Crux, the Main Players, the Perceived Need, the Remain Case, the Force of History, the Leave Case, the Campaign, the Vote, the Day After Review, Looking Ahead and finally Reflection.

These may be the two main themes behind an understanding of Brexit. In particular, how did factors, events and people impact on voters? And why did voters, on balance, favour Leave?

In considering the “how,” the main forces include (amongst others) preconceptions, prejudices, people and propaganda. The first two may be fairly stable for an individual but the second two are more volatile and can swing a vote. As for the “why,” it depends on the overall effect of all the influences on the voting public.

Most of the story is an investigation of the two themes. A lot of claims were made by both sides and refuted more or less effectively; there was an element of being economical with the truth; uncertainty was rife; not least, there were a variety of stories, quotes and ironies. Although much is subjective and debatable, all aspects are explored. In order to avoid bias however, some questions must remain for the reader and for history.

The normal version of democracy is to operate via political parties and regular General Elections, based on their manifestos. But the main reason for the PM calling the Referendum concerned party management, i.e. to try and heal a rift in the Conservatives. This may not have been a good enough reason, unleashing as it did, an unduly powerful democratic or populist result. On the other hand, it was an essential tool to overcome the remoteness of Westminster from the people, i.e. a method to get back to Rule by Consent. If the people were right to favour Brexit, David Cameron may yet get a favourable judgement from history.

Since single-issue referendums are probably here to stay, it must be wise for us all, especially politicians, to gain a better understanding of the public, thus bringing policies more into line with the concerns of voters.

At the time of writing, Amazon has four 5 star reviews, two of which are set out below:

These two pictures give an idea of the economic arguments of the campaign: 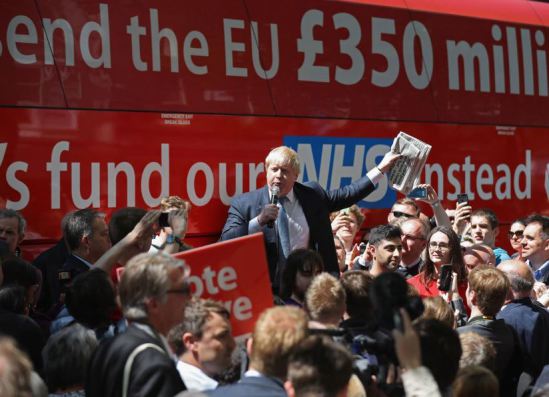 The Leave Side claimed that the cost of the EU was enormous whilst the Remainers said that the £350 million p.a. subsidy from the UK to the EU was a big exaggeration. The suggested use of this sum for the NHS was dubbed by Remainers as a "big lie on the bus". Perhaps I should mention that the book itself does not contain pictures. 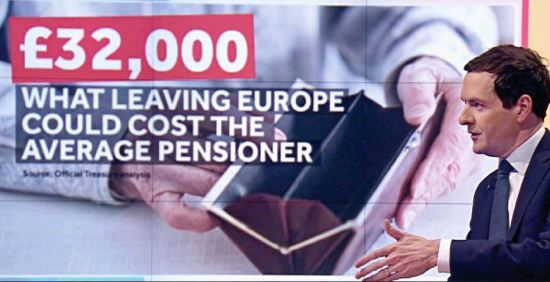 Chancellor Osborne for the Remain Side forecast a huge financial loss for pensioners whilst the Leavers said that was not true, merely being Project Fear.

The chapters, followed by an Index, are arranged as far as possible in chronological order:

A fairly random section of the text follows in order to help the website visitor to see the sort of ground covered. Although it is part of the chapter about the case for Vote Remain, it is probably the most extreme example of the unexpected during the campaign. And how did it affect the outcome? There follows an argument from Leave and a response from Remain.

This tragic event took place at the height of the camapaign leading to terrific publicity. Since it could have been influential on the voting, it is included here just before the Remainers’ Claims.

On 16 June 2016, Jo Cox (41), Labour MP for Batley and Spen, was shot and stabbed multiple times when about to attend a constituency meeting in Birstall, West Yorkshire. Reportedly, a doctor pronounced her dead at the scene and suspect Tommy Mair (52) was arrested by police. Police were reported to be investigating a claim that the suspect shouted “Britain first,” a possible reference to a small far-right political party. That party later denied any involvement. When asked his name in court on 18 June, Mair said “Death to traitors, freedom for Britain.”

The popular MP had won the seat for Labour in 2015 with an increased majority and was widely recognised as a dedicated politician. Tommy Mair, who was duly charged with murder, had a history of mental illness and also connection with far-right parties. Her widower, Brendan Cox issued a statement urging people to “fight against the hatred that killed her” and asked for donations to three of her favourite charities. Such was the publicity and the public reaction that £1 million had been donated by 20 June. Oxfam released an album, Glastonbury Festival began with a tribute and President Obama phoned Brendan Cox with his condolences. Parliament was recalled on 20 June to enable MPs to pay tribute to Jo Cox. The news was dominated by the murder for a week before the Referendum. It was a major story and one which could not have helped the Leave Side.

“I want my country back again” might be the case summary for the Leavers. Why give away your powers to an anti-democratic foreign entity? For hundreds of years, this country took all its own decisions, large and small. Whether it related to food regulations or a declaration of war, Britain was set up, as it should be, to carry out the wishes of her people.

A sovereign state can do anything it desires but a member of a wider super-state cannot: it is a tremendous loss of freedom. The UK is in a special position because it has a bigger history of beneficial laws and customs than other states. Thus it is jarring to think of relatively untrained foreign judges applying laws devised by unelected bureaucrats, and all a far cry from the relatively small customs’ union which we joined in 1973.

But much worse is the EU requiring that there can be no limit on migration from the whole area of some 500 million EU citizens into the crowded UK with its existing overburdened infrastructure. It is a core EU objective which is soon to be enhanced in its effect by the entry of more countries including Turkey and its population of nearly 80 million. There has to be a limit and the only way of achieving that is by Voting Leave. Moreover, Brexit would mean a fair system of border control without discriminating against the rest of the world in favour of EU migrants; all would be subject to the same rules.

Response: Here are Little Englanders who think the country can survive on its own in the world without the benefit of the Single Market and its 500 million population. Let’s not take a leap in the dark and instead, work with our European partners for the common good. The freedom of movement and euro are two of the great EU achievements and must be protected. They might have their downsides, but that is the price that has to be paid for the great European vision. Vote Leave would be followed by difficult trading conditions and other restrictions imposed by the EU which has to protect itself against other members wanting an In/Out Referendum. Exit terms for the UK would have to be harsh.